This guide is meant for advanced DIY so the procedure is gears more toward the top level disassembly instructions but all critical points for a successful modification will be pointed out clearly.  The Samsung Google Galaxy Nexus camera module will be used as a reference for pointing out key features.  Even though there are many different camera modules in the marketplace, however, they are all very similar in constructions.  Therefore, the goal of this guide is to provide a sufficient basic knowledge that you can apply to most other models as well.  The Eigen Imaging Android and iOS apps for Multi-Spectral Imaging and Analysis can be used with or without this modification although the software algorithms are designed to process images of the entire visible to near IR spectrum.

Hint: To minimize down time to the use of your smartphone, one suggestion is to order a spare camera module to make the modification since it is fairly inexpensive and much less risky as a learning process.  After the modification, swap it in, and ready to use with little time down time.

Before carrying the modification it is necessary to first understand the basic construction of a camera module.  As shown in Figure 1, a camera module basically consists of two subassemblies.  The first upper assembly typically contains a focus motor body that holds a lens and an IR cutoff filter.  The second lower subassembly contains an imaging sensor bonded to a ceramic carrier, and a carrier PCB. 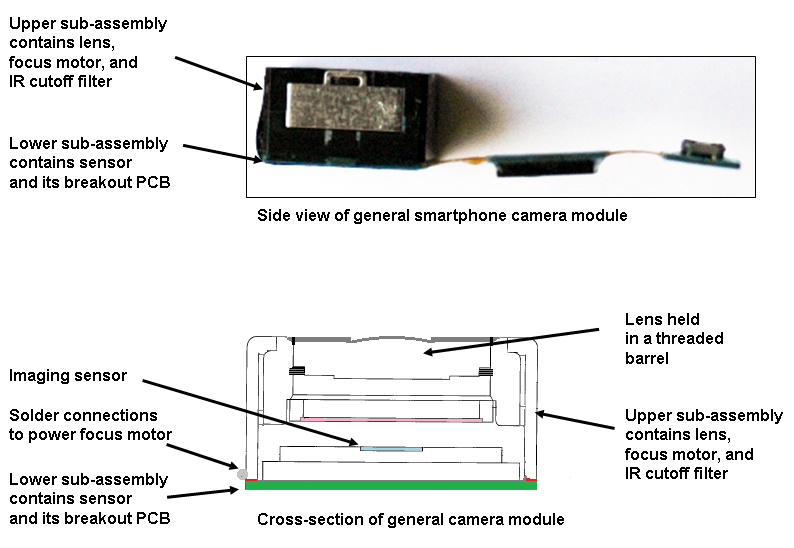 Remove camera module from the smartphone

Before taking the smartphone apart, the near-range focus of the camera needs to be determined.  For the Samsung Galaxy Nexus, the minimum close-up focus distance is about 2 inches.  This will be slightly different for each brand of smartphone. This first step is important and will be retested after the modification by taking a picture of a printed page with tiny fonts.  Find the minimum focus distance of your smartphone, take a picture, and save the image as well as the printed paper that was used for this baseline minimum focus distance test.  See Figure 2.  The saved image should be sharp and the text should be aligned parallel to the display screen.  That way the expected field-of-view at this distance can be seen.  Make note of the character at the left edge of the screen and the character at the right edge of the screen. 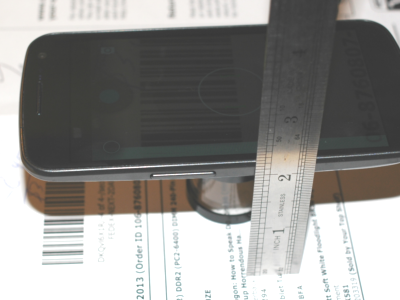 Hint: there are lots of instructions on the internet regarding the tear down of the Samsung Galaxy Nexus smartphone so it will not be repeated here.   As an example, ifixit has excellent procedures here.  Warning: the camera module is ESD sensitive. Please take proper ESD precautions.

The camera module will be referred to as CM in the instruction. 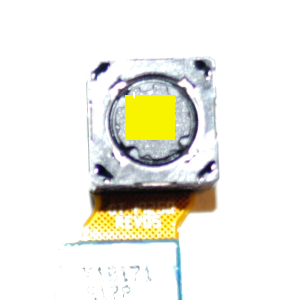 Figure 3. Protect lens with tape before starting the mod 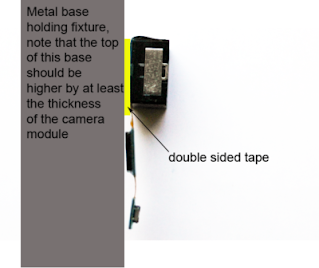 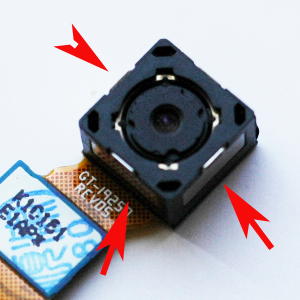 Figure 5.  Warm up along these 3 edges to soften the bonding adhesive 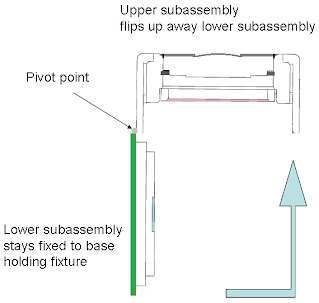 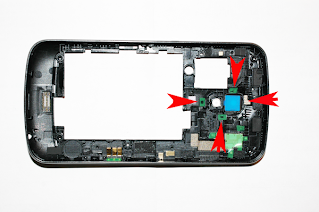 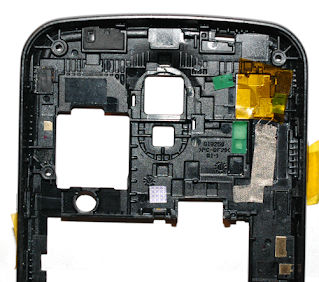 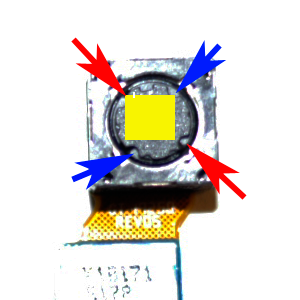 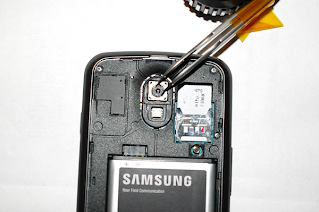 Before and after spectral response
The montage of images in Figure 13 below show expected data and results.  The top left shows the break out of the camera module in which the internal filter needs to be removed.  The top-middle image shows RGB response of the stock filter while the top-right shows visible-to-near-IR response of the sensor after the stock filter is removed as measured by the Ocean Optics USB4000-VIS-NIR spectrometer.  The bottom row proves that there are no change in form, fit, or function to the smartphone after modification.  Click on the image to enlarge the photo.

Figure 13.  Before and after spectral response

To confirm that there's no dust on the sensor, shoot an image of a clear blue sky like that of Figure 14.  Any noticeable specks of dusk will reveal themselves clearly.  If any dust spots are seen then go back to the above instructions on how to remove them.   Best is to shoot the portion of a blue sky without any clouds in it.  Keep the camera in the shade while shooting to avoid lens glare. 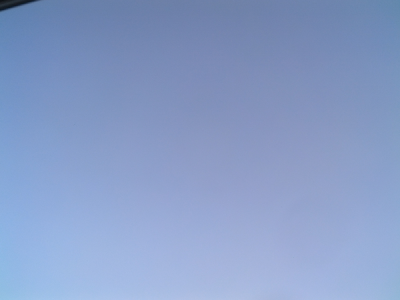 By populating the lens / flash cover plate with a different bandpass filter(s), a variety of interesting infrared images can be taken as shown in Figure 15.  The top-left filter uses a special triple-band filter that blocks blue and passes narrow bands of green, red, and NIR.  Top-middle uses a special triple-band filter that blocks green but passes narrow bands of blue, red, and NIR. Top-right uses a filter that passes wavelengths above 700nm.  Bottom left uses RGB filter for standard color.  Bottom middle also uses RGB filter but passes more blue.  Bottom right shows the mounted filter in the lens /flash cover plate.  Click on the image to enlarge it. 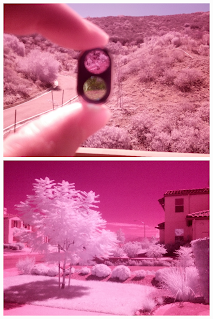 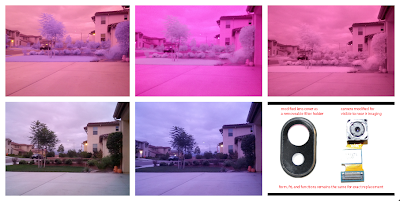 Figure 15.  RGB vs Infrared images
Detecting plants chlorophyll
Figure 16 shows a practical use of multispectral imaging for detecting which plants in the natural environment have higher moisture content and which ones are under stress.  These minute effects can be seen through multispectral imaging before the human eye can detect these changes. The image below uses a filter that transmits 400-650nm and a narrow band around 850nm.  The plants in darker red are healthier due to their higher moisture content.  Getting plenty of water allow them to grow better than those shown as lighter pink.  A few plants in the back in lighter yellow, due to the lack of chlorophyll, are not getting enough water which may wither and die if not taken care of soon. 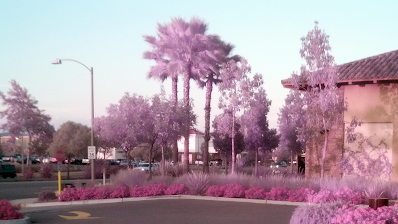 Figure 16.  Detecting plants chlorophyll
Night Vision Through 4x Riflescope
Figure 17 shows the utility of using the modified smartphone on a 4x scope to assist night surveillance. The modified Galaxy Nexus smartphone was mounted to a DIY mount adapted to fit on the Pentax 4x riflescope.  The building was over 1.5 miles driving distance as seen on Google map and it was lit by surrounding street lights.  The attached high quality IR Streamlight flashlight works well at about 85 meters (279 ft) range.

Figure 18 shows another utility of using the modified smartphone on a 4x scope to detect camouflage netting.  The range for this test was about 85 meters (279 ft) away.  The picture on the left shows that the camo net can be easily seen without much effort with the enhancement algorithm ON.  In normal camera viewing as shown in the right picture, one could not quickly discriminate the camo net that was placed over the trees.  Click on image to enlarge for more details.